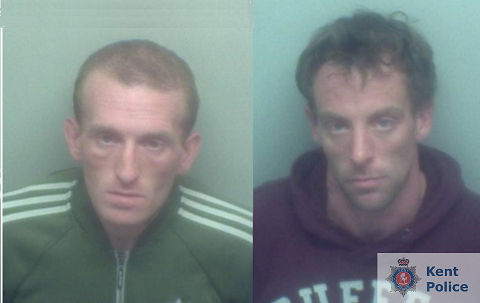 Two burglars, who were caught on CCTV breaking into The Friends Of Wisdom Hospice's Charity shop in Sittingbourne have been jailed.

Lee Heathfield, aged 33 and Shane Baker, aged 28, entered the property in July stealing electronics and cash. Both were identified and arrested. Baker, of no fixed address, was jailed for 27 months and serial burglar Heathfield was jailed for fraud, theft and three other counts of burglary in Sittingbourne. His crimes were committed in June, July and August.

CCTV footage showed Heathfield breaking into two properties and attempting to pay for items with a stolen bank card. When officers searched his home in East Street they found a stolen cash till, keys and a driving licence. He was jailed for 40 months.

Both men were sentenced at Maidstone Crown Court on Thursday (7th September).

Investigating Officer PC Chris Jones told SFM News: "both men are career criminals and prolific offenders with a clear lack of morals shown by their willingness to target a charity shop. CCTV footage and enquiries by local officers secured these sentences and now we have two more burglars off the streets and behind bars. I hope this prison term will be the wakeup call both men need".