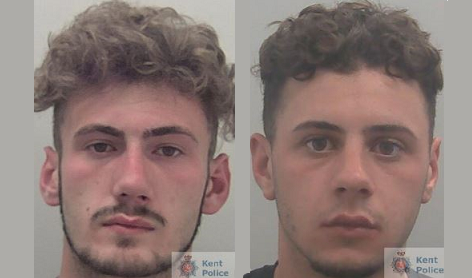 Two burglars have been sentenced at court after they stole vehicles parked outside owners’ homes in Swale and Medway.

On the 26th June, the pair stole an Audi A4 parked on a driveway in Coombe Drive, Sittingbourne. They replaced the number plates with a set stolen from a similar vehicle and then drove to Iwade where they attempted to commit another burglary.

They then travelled to Gillingham and broke into a house before stealing a Mercedes CLA parked outside.

Three days later, on 29th June, Smith and Lee stole another Mercedes CLA from the driveway of a house in Minster-on-Sea. On 5th July, they also attempted to break into a BMW owner’s home in the same town.

They stole a further Mercedes in Sittingbourne overnight on 11th July and the following day, Lee was seen driving it on false number plates by a Kent Police patrol.

The officers followed the vehicle onto Lower Rainham Road where it failed to stop when the patrol activated its blue lights.

Lee, of Flanagan Avenue, Queenborough continued towards the Medway towns at speed, driving in an extremely dangerous manner and causing other vehicles to take evasive action to avoid a collision. He was arrested in Chatham when the vehicle had to stop in a queue of traffic.

Investigators from the Chief Constable’s Crime Squad identified that Smith, of Church Road, Murston was Lee’s accomplice, and he was arrested on Tuesday 13th July.

Detectives proved the two were responsible for the multiple break-ins and theft offences, and they were both charged with conspiracy to commit burglaries.

Lee was also charged with dangerous driving, driving without insurance, driving otherwise than in accordance with a licence and failing to stop when required by a police officer.

The pair, both aged 20, pleaded guilty to the indictments at Maidstone Crown Court. On Tuesday (16th November), Lee was sentenced to three years and nine months. Smith was sentenced to two years and six months, and both will initially serve their detention in a young offender institution. Lee was also disqualified from driving for 40 months.

Detective Sergeant Richard Taylor told SFM News: "These criminals violated several homes to steal car keys whilst the owners were asleep on the premises. They showed no regard for the impact their actions would have on the victims and, when pursued, Lee had scant concern for the dangers he posed to other road users. Their detention in a young offender institution is entirely appropriate."