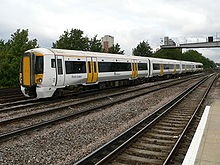 A body was found on the mainline near Sittingbourne railway station last night (Monday 12th August) at around 11.15 pm.

British Transport Police have told SFM News: "Officers attended the scene last night and located the body of a man with injuries consistent with having been hit by a train. Medics from the South East Coast Ambulance Service attended but the man, thought to be in his fifties and from the local area, was pronounced dead at the scene. The death is currently being treated as non-suspicious."