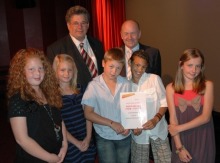 Youngsters from the Isle of Sheppey's Bay Kidz Club and Cheyne Middle School receive a Highly Commended prize for their film "Seen But Not Heard" from Cllr John Morris (right) and former Cllr Trevor Fentiman, at the previous Awards.

The organisers of Kent Film Awards, part of this year's Swale Film Festival sponsored by 106.9 SFM, are inviting all local youngsters to make a movie during their summer holidays for the chance to win film making equipment and a trip to the world-famous Pinewood studios.