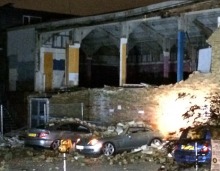 The bottom half of Sittingbourne High Street (from Central Avenue downwards) remains closed following the partial collapse of the Bell Shopping Centre in high winds.

A number of vehicles have been damaged in the car parking area to the rear of the centre and behind The Sumnor and the Sports Bar (part of the Snooker Club). 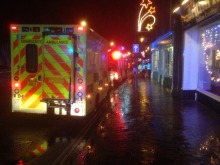 Part of Sittingbourne High Street has had to be evacuated after a partial building collapse.

Revellers in The Sumnor Weatherspoons Pub and The Snooker Sports Bar were evacuated shortly after 6.00pm this evening, following a partial collapse at the rear of their premises that formed part of the old Bell Shopping Centre.

It is understood that there were no injuries involved but that a number of vehicles have been damaged.