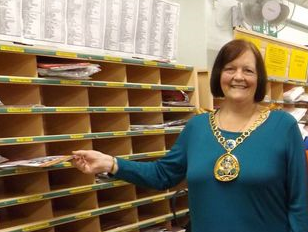 Cllr Stephen told SFM News: “On behalf of Swale Borough Council, I would like to offer my condolences to the family and friends of former councillor and Mayor of Swale Lesley Ingham who sadly passed away recently. During her year as Mayor of Swale, Lesley showed her caring manner to everyone she met. Lesley was respected and liked by all her peers and performed her duties as Mayor with great gusto along with her Mayoress, Ms Ashlee Brawn, her daughter. Lesley supported and promoted her chosen charity, Perthes’ Disease during her mayoral year and raised over £600 for the charity. Family and friends were very important to Lesley and she will be sorely missed by all that knew her.”

Cllr Ken Ingleton, who represents Minster Cliffs, told SFM News: “Lesley was a very pleasant and accommodating woman who worked very hard for her locality and for the people she represented.”

Mrs Ingham’s daughter, Ashlee, thanked everyone for their kind words, thoughts and prayers and told SFM News, on behalf of the family: “The support we have had from our close friends and family has been overwhelming. There are far too many people to name individually, but I’m sure they know who they are.”

It is understood that a funeral service will be held on Friday 25th June.