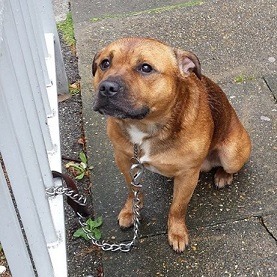 A badly injured Staffordshire Bull Terrier called Thomas has been found a new home in Sittingbourne, thanks to a record 90,000 views made to Swale Borough Council's Facebook page.

It follows the harrowing story of the 5-year-old dog, which was left badly stabbed and tied to a railing just off Thomas Road in Murston and featured in a news stroy on your local community radio station 106.9 SFM.

The good news is that Thomas is well on the way to making a speedy recovery and is moving into his new adopted home later this week. As with other cases of strays or lost and found animals, the information was posted on Facebook seeking information from the public as to his original ownership and asking if a new home could be found for him. Ordinarily 10,000-15,000 views would be made by local people, but such was the euphoria surrounding Thomas, a staggering 90,000 views were made in just a three day period.

Alister Andrews, Environment Response Manager for Swale Borough Council told SFM News: "Considering only 140,000 people live in Swale, to get this many views for a single dog story was simply extraordinary and judging by the type of response we have received, it just shows how much local people really do care about the plight of poor animals such as Thomas. I am delighted that we have re-homed him and hopefully he, and the family which has taken him in, will be very happy together".

Swale Borough Council currently has five other abandoned dogs waiting to be re-homed and if any people are interested in acquiring a new pet, they to are asked contact the Kennels directly on 01795 842466.