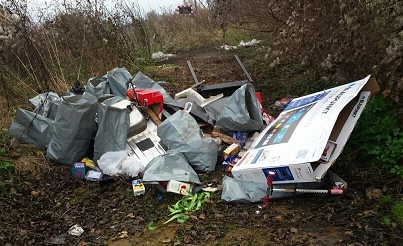 A Teynham woman has been fined £100 and ordered to pay £235 costs after household waste was found dumped by a level crossing.

Shana Dale, aged 31, of Lower Road in Teynham, was prosecuted by Swale Borough Council following an investigation into a large quantity of waste found dumped near the level crossing on Lower Road, in December 2016.

The waste comprised 12 sacks full of household, construction and demolition waste, as well as a kitchen sink and cardboard boxes.

Officers investigating the incident were able to trace the waste back to Miss Dale, and made several attempts to speak to her about the incident. At no time did she cooperate with the investigation, leaving the council no option but to prosecute.

Dale pleaded guilty to failing in her duty of care to make sure household waste was disposed of by an authorised person at Medway Magistrates Court on Tuesday 19 December. Her solicitor told the court she had paid a man £50 to take her rubbish away, and that not all the rubbish was hers.

Cllr Nicholas Hampshire, deputy cabinet member for safer families and communities at the council, told SFM News: "We take fly tipping incidents very seriously, and if you need to get rid of excess waste, it is your responsibility to make sure it is disposed of correctly, or you could end up in court. We want to catch those who are actually dumping the waste, because if they've done it once, it's likely they'll do it again. We are simply asking people to check who is taking their waste, make sure they're licenced, and keep invoices and receipts so you can help us trace them if waste is dumped."

To check whether someone is licenced to carry waste visit the Environment Agency website or you can call 03708 506506.

For more information about fly-tipping, and what Swale Borough Council is doing to tackle it, visit www.swale.gov.uk/fly-tipping.