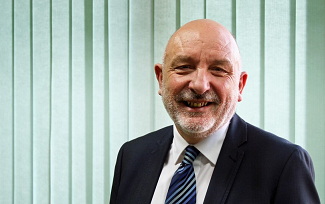 Mark had been undergoing treatment for cancer since last year, but during a recent stay in hospital, he contracted coronavirus. This proved to be one fight too many, and he passed away yesterday (Thursday 28th May).

Cllr Roger Truelove, Leader of Swale Borough Council, told SFM News: “We are all deeply saddened that our Chief Executive Mark Radford has passed away. This is so very sad because he has fought so long against his illness, only to catch the Coronavirus whilst receiving treatment for his condition. He has been so brave and sustained himself with the conviction that he would return to work with us. He was dedicated to the council and loved the borough, and he and I have spent much time discussing the future, as well as talking about our respective football clubs. It is a very sad day, and my thoughts and prayers are with Mark’s family and friends.”

Mark began working at Swale in 1987 as the council’s Estates Officer and Valuer, responsible for managing the property assets. In 1996 he was promoted to Director of Corporate Sservices and was responsible for running the business of the council as well as transforming service delivery of key services.

He became interim chief executive in February 2017 following the departure of Abdool Kara and his post was made permanent in January 2018.