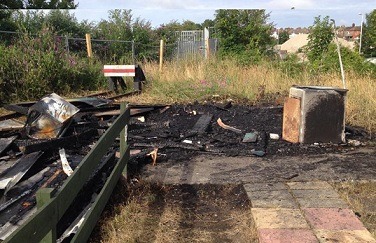 Sadly this is the second major blaze at the SKLR in 15 months, with a previous fire in March 2013 completely destroying the "old mess room". Paul Best from the SKLR, told SFM News: "We are totally devastated. We've got no buildings left at Sittingbourne Viaduct Station now, just some charred remains. We will now need to raise about £75,000 to get the Railway's facilities up to scratch at Sittingbourne Viaduct, particularly security, buildings and a disabled access ramp".

Anyone who has any information regarding this incident is asked to contact Kent Police by calling 999, quoting incident reference XY/022943/14 or, alternatively, they can contact Kent Crimestoppers free (from any landline) and anonimously on 0800 555 111.

You can donate regularly to the Sittingbourne & Kemsley Light Railway Appeal, or one-off, at www.justgiving.com/SKLR - but don't forget to Gift Aid if you are a UK tax payer!

*** UPDATE *** Paul wanted to say a BIG thank you to everyone who helped with the clearance of the debris on Sunday (29th June) morning and the many passengers who visited across the day. Paul also said that they could do with a couple of steel shipping containers, that could act as buildings at Sittingbourne Viaduct station, until they can build the replacement structures.