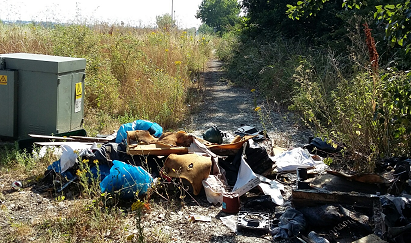 A man has been prosecuted after garage parts, wood, a hanging basket, roofing felt, broken up cabinets, furniture items and cardboard boxes were dumped along Ridham Dock Road last year.

Officers from Swale Borough Council investigated the fly tipping and were able to trace the waste to a Chatham resident. When she was visited by the council, she discovered she had been the unsuspecting victim of an unlawful waste carrier.

The woman had enlisted the help of RM House and Rubbish Clearance via Facebook to clear her home of unwanted items. She admitted she had no idea the person driving did not hold the correct license to dispose of her waste.

The items were collected by a man driving a distinctive yellow flatbed truck owned by Mr Ryan Millard, aged 24, from Hale in Chatham.

Mr Millard claimed he shared the truck with a friend and had no knowledge of it being used for illegal fly tipping. When asked however, he was unable to provide any personal details that would lead investigators to his friend.

Despite his account, as the person with control of the truck, Mr Millard is deemed to be responsible for the crime and was taken to court.

A council spokesperson told SFM News: "Fly tipping is a criminal offence and something we take very seriously, so we're happy with the outcome of this case. Anybody caught having any involvement in the disposal of waste without a valid waste carrier license will be prosecuted. We do want to remind people that anybody disposing of household items has to have a valid waste carrier licence. If you don't check, and your waste is dumped, you could be prosecuted. Always ask for a receipt and be cautious of waste collectors who will only accept cash. Not only is fly tipping unsafe, but it is a risk to wildlife, and it makes the borough an eyesore for everybody who lives here."

To check whether someone is licenced to carry waste visit the Environment Agency website or call 03708 506506.

For more information about fly-tipping, and what the council is doing to tackle it, visit: www.swale.gov.uk/fly-tipping.