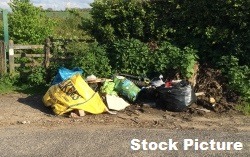 A Sittingbourne builder is £735 out of pocket after passing on trade waste to an unknown third party who fly-tipped the waste in Tonge.

Paul Dadswell, aged 52, of Langley Road in Sittingbourne, was prosecuted by Swale Borough Council for failing to comply with his duty of care for waste created through his work as a builder.

The council began investigating the case when a large quantity of building waste including plasterboard, construction materials and sanitary ware was found dumped at Lower Road, Tonge in November 2015.

When interviewed by council officers, Dadswell admitted giving the waste to an unknown couple without checking they were registered to take the waste away. He also failed to obtain a waste transfer note to cover this transfer of waste, and admitted that he never retained any duty of care notes, despite posing as a professional tradesperson.

Due to the severity of the offences, Swale Borough Council decided to prosecute the case, which was heard at Maidstone Magistrates Court on Thursday (23rd February). Dadswell pleaded guilty to two charges under the Environmental Protection Act 1990, and was fined £250 for each charge, and ordered to pay £205 costs and a victim surcharge of £30.

Cllr Alan Horton cabinet member for safer families and communities at the council, told SFM News: "We spend tens of thousands of pounds of council taxpayers money every year clearing up fly-tipping. Anyone producing waste has a duty to ensure they know who is taking their waste away, and that it will be disposed of appropriately. Failure to do so could result in a hefty fine. By failing to make sure the waste was taken by a licenced carrier he caused a significant amount of waste being fly-tipped in the local countryside. Anyone offering the service must be registered to carry waste, or it could end up dumped, and you could be prosecuted for failing to take reasonable steps in preventing a fly tipping incident."

To check whether someone is licenced to carry waste visit the Environment Agency website or call 03708 506506.