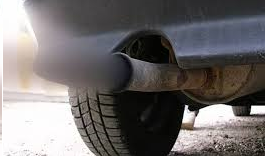 Councillors have approved powers that allow Swale Borough Council to issue Fixed Penalty Notices to people who leave their vehicle idling while not in use.

The powers mean that anybody who leaves their engine running unnecessarily while not in use can be issued a £20 fixed penalty notice if they do not turn off their engine when asked. Anti-Idling regulations came into effect in 2002 and apply to all vehicles including cars, taxis, buses and all commercial vehicles. Swale say that research shows that an idling vehicle can emit up to 20 times more of some pollutants that one travelling at 32mph.

Every minute a car idles it produces enough exhaust emissions to fill 150 balloons with harmful chemicals including cyanide, NOx and PM2.5. These microscopic pollutants can cause asthma and worsen chronic illness such as lung cancer and emphysema and can be particularly damaging for children.

Cllr Tim Valentine, cabinet member for the environment at the council, told SFM News: “These new powers will become part of our air quality action plan to protect residents against further pollution. By enforcing this legislation, we hope to raise public awareness about the damage that can be caused to people’s health by leaving your car idling unnecessarily. We’ll focus on educating drivers to help provide cleaner air across the borough, particularly for residents who live in Air Quality Management Areas and children going to and from school every day. We don't want to issue fixed penalty notices, and it will be a last resort, but we do want to enforce the anti-idling regulations more effectively to improve air quality. We’ve seen a huge improvement in air quality this year as people stayed at home during the COVID-19 pandemic, and those improvements have continued as people use alternative modes of transport.  We want to encourage people to continue the good work and walk, cycle and use public transport wherever possible to help us provide cleaner air for the borough.  We already have an anti-idling campaign in action at three local schools via the Clean Air for Schools campaign, so the introduction of this legislation will allow us to extend this campaign across the borough. Leaving your car idling for just 10 minutes every time you do the school run creates 1,520m³ of excess pollutant fumes every year which is enough to fill two jumbo jets.”

Now approved, the council say they will work to install the new measures later this year.