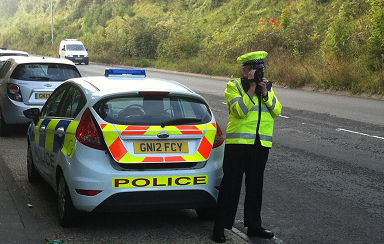 Speeding motorists will be targeted by Kent Police as part of a two week national campaign aimed at reducing the number of people killed or seriously injured on the roads.

Between Monday 26th July and Sunday 8th August 2021, Kent Police and other forces across the country will be supporting an operation led by the National Police Chiefs’ Council to educate and enforce the law against those who speed and place other road users at risk.

Kent Police say that "speeding is one of the ‘fatal factors’ that contribute to the highest number of road collisions resulting in deaths and serious injuries, along with not wearing a seatbelt, driving whilst under the influence of drink or drugs, and using a mobile phone or other electronic device at the wheel".

The traffic operation here in Kent will see officers from the Road Safety Unit supported by other roads policing colleagues and volunteers from the Special Constabulary visit speeding hotspots across the county. The Safety Camera Team will also be deployed to existing authorised locations to provide a visible deterrent to anyone considering driving over the limit.

Meanwhile, Community Speedwatch volunteers will also be taking part in the operation at approved sites across Kent with 20, 30 and 40mph speed limits. Community Speedwatch is an educational alternative to enforcement, with warning letters sent to registered owners of vehicles caught exceeding the limit.

The last national speeding operation was held in April 2020 when around 10,800 speeding offences were recorded in Kent including more than 500 that were serious enough to warrant a court appearance.

Chief Inspector Elena Hall, Head of Roads Policing at Kent Police, told SFM News: "Whilst the vast majority of motorists drive in a safe and responsible manner on a daily basis, there are still too many travelling at unacceptable speeds who put themselves and other road users in harm’s way. Motor vehicles are potentially lethal weapons and the faster your speed, the less time you have to react to unforeseen hazards or mistakes from other drivers and the greater the impact any collision may be – making it more likely that you or someone else will be killed or seriously injured. We therefore will not hesitate to take enforcement action against anyone caught driving in such a reckless manner, not only during the course of this national operation but every day when our officers are on patrol. Road safety is a shared responsibility and we work regularly with our partners including Kent County Council, Medway Council and Highways England to help educate all motorists about the best way to ensure we all reach our destinations safely."