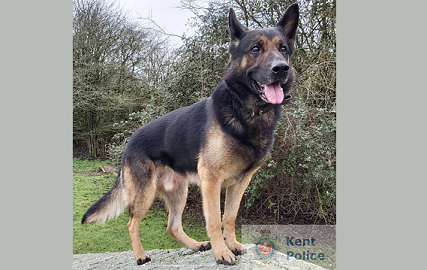 A Kent Police dog launched into action to detain a man who attempted to make off from officers.

Police Dog Lenny was on patrol with his handler at around 2.35am last Friday (24th January) when the pair spotted a suspicious vehicle on the A2 in Faversham. The officer signalled for the vehicle to stop but it made off before coming to a halt in Murston, Sittingbourne.

The occupants took off on foot but Police Dog Lenny brought one of them to a stop in Church Road. The police helicopter was scrambled leading to officers detaining two males hiding in a farm off of Blacketts Road, Sittingbourne.

The three have been released from police custody under investigation.