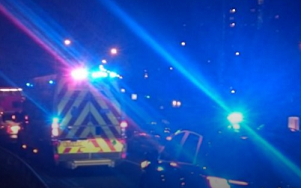 A 34-year-old man from Snodland, the alleged driver of the BMW, was also arrested on suspicion of driving under the influence of drink and drugs and has been released pending further enquiries.

Investigating officers would like any witnesses to come forward with information. They would particularly like to view any dash cam footage that may have been captured of either of the vehicles travelling in the moments leading up to the collision.