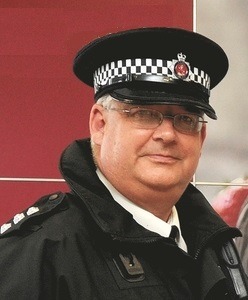 Chief Inspector Tony Henley (pictured), Swale's District Commander, will have greater control of resources in the area to tackle crime and anti-social behaviour as part of a new model launched by the Chief Constable of Kent Police earlier today.

Chief Inspectors for each of the 13 districts across Kent and Medway will be able to deliver enhanced local policing with the creation of two new units. The newly-formed Local District Policing Teams will be tasked to deal with emergency and non-emergency calls, investigate local crime such as assault and theft and provide increased community visibility across Swale. Local District Policing Teams will continue to use innovative tools such as Predictive Policing to help tackle and prevent crime in Kent's communities.

Under the previous model, officers responsible for responding to emergency 999 calls and custody staff were managed centrally and not under the direction of the district commanders. As a result of the change, Chief Inspectors will have greater flexibility in allocating resources where they are most needed. New Community Policing Teams will form part of the existing Community Safety Units and will tackle anti-social behaviour and persistent local problems. They will provide a better connection with their local communities, while Police Community Support Officers will continue to work closely in their designated areas. Each ward across the county will continue to benefit from its own assigned PSCO.

Community Safety Units remain dedicated to dealing with licensing, mental health and crime prevention. They will also locally direct volunteers and district Special Constables and work alongside local authorities and partner agencies. Each district will continue to benefit from existing support from detectives in CID and the Kent and Essex Serious Crime Directorate, as well as other specialist units within the force.

District Commander, Chief Inspector Tony Henley of Kent Police, told SFM News: "The integration of local policing resources across the borough will increase my team's flexibility in responding to Swale's specific needs. For example, a shift pattern has been introduced that is designed to give a more consistent level of policing on the Island and Faversham. Local police will continue to enjoy strong relationships with key partners such as Swale Borough Council and Kent County Council Community Wardens as well as housing officers from local providers such as Amicus Horizon. We know the more co-ordinated we are in working together the more effectively and efficiently we will be able to tackle anti-social behaviour in the borough.  Therefore, the operational hub will be expanded in Sittingbourne to include every PCSO in the district. This will bring them under the direction of the most experienced sergeants and inspector who are best-placed to resolve anti-social behaviour."

Kent Police Chief Constable. Alan Pughsley. told SFM News: "Local policing is absolutely fundamental to everything we do and is at the heart of this new policing model. Listening and working together with our communities to make sure Kent continues to be a safe place and giving the best possible service to victims were the commitments I made when I became Chief Constable. Like many public sector organisations, we have been carefully planning for the challenges of the second Comprehensive Spending Review and overall we have to find a further £20million savings between 2014 and 2016. We were always aware there could be further cuts to the police budget and took this into account in our planning. Our new model outlines our approach to this next set of challenges and our vision for policing in Kent for the years to come. Putting greater resources at the disposal of our 13 district commanders will ensure they have direct influence and responsibility as to where those officers are best deployed to meet the needs of the local area."