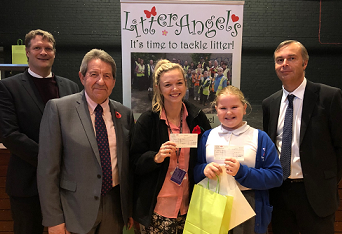 Litter Angels is a charity set up in 2008 by Mr Henderson to create, through education, awareness about the anti-social nature of litter and its effect on our local environment.

The theme of this year's competition was how litter harms the seaside and 14 local primary schools took part.

With the help of Paul Knell and Matt Hogben from McDonald's, the charity's main sponsor, all the children who were shortlisted were presented with a certificate and the winner from each school received a goodie bag containing a personalised mug and a copy of the Litter Angels storybook.

The overall winning poster was designed by Fiorina Coccia, who attends Bobbing Village School. Fiorina received a cheque for £50 and her school received a cheque for £100, which was collected by teacher, Kirsty McBride. The winning poster will now be printed on a metal sign that will be displayed in the car parks of the McDonald's restaurants across Sittingbourne and Sheppey.

Mr Henderson told SFM News: "Litter is an important issue locally and this competition has made the children think about how litter can have a negative effect on the seaside. They were all very excited at the presentation and I would like to thank all those involved with the competition, particularly, McDonalds for their continued support."