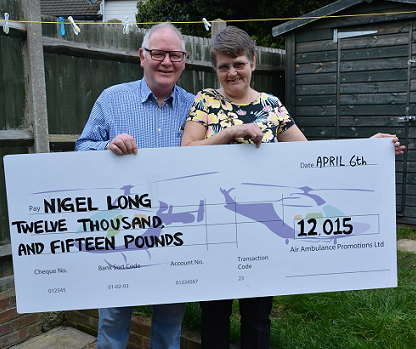 The 61-year-old father-of-three thought nothing more of his £8-a-month subscription until he received a call telling them he had won the top prize in Wednesday's (6th April) draw. He won a grand total of £12,015.54 with random lucky numbers 3, 19, 20 and 28 after joining the lottery last June and is now planning a holiday to Canada to see his brother.

Nigel told SFM News: "I was very shocked to win, I phoned my wife immediately and she couldn't believe it. The most I've won before was about £70 when the National Lottery started. I support the air ambulance because we never know when we may need it in the future. I was at work once when a child got hit by a car on the main road and I helped clear one of the car parks for the helicopter to land."

Kent, Surrey & Sussex Air Ambulance's Regular Lottery costs just £1 per week and there are 12 winners drawn each week with prizes ranging from £25 to £1,000. For an extra £1 a week, players can join the Superdraw which has a maximum jackpot of £25,000. To join the lottery go to www.kssairambulance.org.uk/lottery or call 01622 833833.