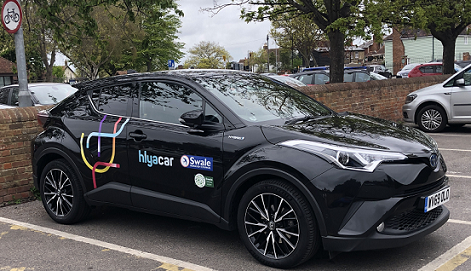 Councillors have agreed the rollout of a low cost, low emission car club to Sittingbourne.

Swale Borough Council will be launching the next local car club to help people access cleaner vehicles, without the expense and hassle of ownership.

Swale BC say "the scheme will be building on the successful trial of the first club set up in Faversham last year. This has been estimated to have saved local drivers almost £24,000, and reduced CO2 emissions by 6.39 tonnes, in the first three months".

For as little as £3 an hour, Hiyacar will provide low emission vehicles on a pay as you go system with online booking where users can sign up for free.

Members will be able to access the vehicles using Hiyacar’s keyless QuickStart technology, via the Hiyacar app. The rental price includes car cleaning, maintenance and management information and are all covered by Hiyacar’s bespoke insurance.

Cllr Julian Saunders, Chair of the council’s Environment Committee, told SFM News: "Car clubs offer people an affordable alternative to owning a car and help improve air quality and health by encouraging members to walk and cycle more often, rather than jumping in the car. The trial in Faversham has been a great success, so we are keen to roll it out elsewhere so even more people can benefit. A feasibility study identified Sittingbourne as the best place to roll out the next car club, but we are still keen to roll them out to other parts of the borough in future.”

Cllr Tim Valentine, Deputy Chair of the Environment Committee, added: “Running a car is expensive – buying it, insuring, maintaining and fuel are significant costs. People who drive less than 6- 8,000 miles annually could save up to £3,500 a year by using the car club. The trial starts next month, and at the end of the three years, we intend for the car club to be self-financing and to continue as part of our plans for more active travel options."

Graeme Risby, CEO and Co-Founder of Hiyacar told SFM News: “We [Hiyacar] are proud to have played a part in the success of the initial car club trial in Faversham and are thrilled to be further improving sustainable transport access for residents of Swale, with the launch of this trial in Sittingbourne. Providing residents with affordable access to low emissions vehicles, will help drivers in the community get where they need to go, more sustainably. We’re excited to see how this car club trial progresses.”

The council will fund the set up costs of the car club of £29,262, plus the additional cost of a dedicated charge point, from money from local developments.

The council have confirmed that the contract to run the scheme will run until February 2025 – in line with the Faversham car club – after which the scheme is expected to be self-financing.