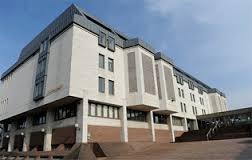 The Court heard that at 2.45pm on Friday the 29 November 2013, Olsen walked into the Fishery Shop where Mr Langley was working and shot him once in the upper abdomen with a double-barrelled shotgun. He had visited the shop several times early that afternoon looking for Mr Langley. When questioned by other staff, Olsen said he wanted Mr Langley's permission to shoot a duck. Another member of staff and some customers had noticed him walking around with the shotgun before he entered the shop for the final time.

The employee and the customers were in the car park when they heard a shot fired. Olsen came walking out of the shop and fired another shot up into the air before walking off. The employee went back into the shop to find Mr Langley had been shot in the chest and called 999. However, the father of two was pronounced dead at the scene.

Kent Police officers found Olsen in possession of the gun and inside his property was a bag he had packed in preparation to go to prison. He was arrested on suspicion of murder. They later charged him with murder in the early hours of 30th November 2013.

Olsen will be sentenced on Monday 12th May at Maidstone Crown Court.