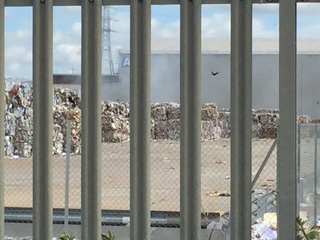 Kent Fire and Rescue Service tackled a "large fire" at the paper mill in Ridham Avenue, Kemsley earlier this afternoon.

It's believed that a mechanical digger was also used to break up and move the paper stack.

There was a large amount of smoke in the area and local residents were urged to close their windows and doors as a precaution whilst the fire was being tackled earlier.

Traffic on the Northern Relief Road (Swale Way) was not affected by the fire.