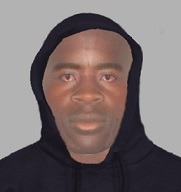 It is believed those responsible entered the man's house while his family was upstairs and took the keys from a hook on the wall.

A witness has helped officers create a computer-generated image of a man described as being black, about 5ft 10in with bloodshot eyes and bushy eyebrows. He was wearing a dark blue hooded jumper and dark gloves.

Alternatively you can call Kent Crimestoppers free (from any landline) and anonimously on 0800 555 111.