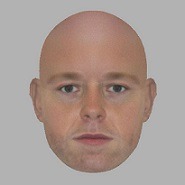 The suspect is described as a bald white man, aged between 18 and 21, about 6ft tall and of heavy build. He was wearing a black hooded top and black shorts with white stripes.

Detective Constable Nichole Carter, investigating officer at Kent Police, told SFM News: "investigations are ongoing and I would still encourage anyone who has information but has not yet spoken to the police to get in touch. We have released an efit image of a man we would like to speak to and I would ask anyone who thinks they recognise this man to contact the police".

Anyone who recognises the efit image, or has information about this incident, is asked to contact DC Nichole Carter at Kent Police by calling 01634 792637 and quoting reference XY/27756/14. Alternatively, they can call Kent Crimestoppers free (from any landline) and anonymously on 0800 555 111.