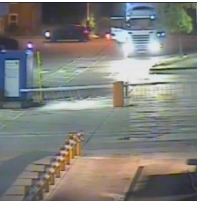 Officers from Kent Police's Serious Collision Investigation Unit have released an image of a car they would like to trace following a fatal road traffic collision in Teynham.

Collision investigators are keen to speak to the driver of a dark coloured hatchback that is seen to stop momentarily at the scene before driving on.

Officers were called to the A2 London Road at 5.40am on Sunday 8th September after reports a red Honda motorcycle had been in collision with a white Scania articulated HGV.

The motorcyclist, 44 year old local man Jeremy James Nicholson, was pronounced dead at the scene. The driver of the HGV was uninjured.

A 74-year-old man from Dover was arrested at the scene on suspicion of causing death by dangerous driving and has been re-bailed pending further investigation until 8 January 2014.

Investigating officer, Police Sergeant Glyn Walker of SCIU, told SFM News "CCTV footage shows the car slow down and stop momentarily. We are keen to speak to the driver who it's believed might have been following the motorcyclist in the same direction and could have witnessed the collision. It's important to point out that the driver is not in any trouble in relation to this, we just want to speak to him as we continue to build a picture of what happened that day."

Anybody who may have witnessed the crash is asked to call the Kent Police Serious Collision Investigation Unit, at Kent Police Maidstone Headquarters, on 01622 798538.