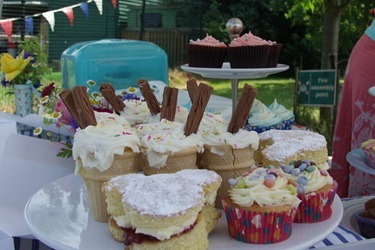 Organisers of Tunstall Primary School's Summer Fete were left shocked and distressed after stock and prizes for their event were stolen in a burglary.

It is thought that thieves broke-in to the school's storeroom on Thursday (2nd July) evening and stole soft drinks, alcohol and many of the raffle prizes, most of which had been donated and gifted by parents over the previous year.

Speaking live on Saturday (4th July) morning to 106.9 SFM's Jason McCrossan, one of the Fete's organiser's Juliet Sensier said that parent's were shocked and saddened to find out that many of their donations had been taken just hours before the fete was due to begin.

Juliet then launched an appeal to SFM's listeners for any help that they could offer in the way of donations and prizes to replace those that were taken.

Shortly after, a number of calls were made to 106.9 SFM from community spirited people including local businessman Kevin Wilson from Beds4uForLess on Sittingbourne High Street who spoke to Pete Flynn on "the Saturday Show" and said that he would pledge a couple of foam pillows, worth about £40 for the school's Raffle and Sally Reeves at Bailey's Coffee Shop who, after hearing Janet's appeal, donated several gift vouchers. A number of other people were inspired by Juliet's story, including a lorry driver who heard the plea on the radio and turned up to off load a number of boxes, including lemonade and other confectionery. Asda Sittingbourne's Community Champion, Claire Fosbeary, also heard the appeal and arranged for the store to donate a trolley full of soft drinks to make the day happen.

Speaking again to 106.9 SFM, just as the school's Fun Day was about to began, Juliet thanked everyone from the local community who had turned up after the "radio appeal" and donated items and said how grateful she was that some good had come from the trauma of the theft and that the event was "full steam ahead".