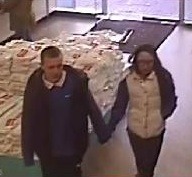 The man is described as white with a stocky build, aged between 18 and 22 and wearing a dark jumper with white collar, a dark hooded coat, dark bottoms, dark trainers and white socks.

Officers investigating the theft are now looking to trace the man and woman shown in this image, as they believed they may have information that could help them with their enquiries.

Anybody who can identify the man or woman, or who may have information that could assist police, is asked to call Kent Police's non-emergency number 101, quoting crime reference XY/4136/13, or they can contact Kent Crimestoppers free (from any landline) and anonymously on 0800 555111.