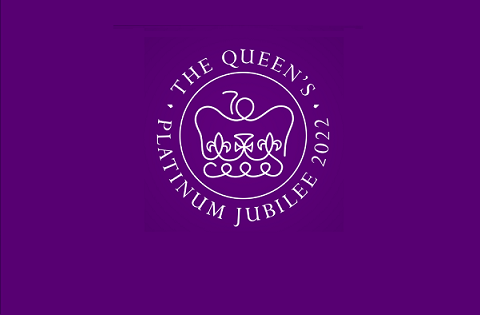 On 6th February this year Her Majesty The Queen became the first British Monarch to celebrate a Platinum Jubilee, marking 70 years of service to the people of the United Kingdom, the Realms and the Commonwealth.

To celebrate this unprecedented anniversary, events and initiatives will take place throughout the year, culminating in a four day UK bank holiday weekend from Thursday 2nd to Sunday 5th June.

The four days of celebrations will include public events and community activities, as well as national moments of reflection on The Queen’s 70 years of service. Visit the Department for Digital, Culture, Media and Sport's interactive map to find out more about events taking place across the UK.

The Queen’s Birthday Parade (Trooping the Colour): Over 1,400 parading soldiers, 200 horses and 400 musicians will come together in the traditional Parade to mark The Queen's official birthday, usually held on the second Saturday in June.

Platinum Jubilee Beacons: The United Kingdom’s long tradition of celebrating Royal Jubilees, Weddings and Coronations with the lighting of beacons will continue for the Platinum Jubilee.

A beacon chain, once used as a tool for communication, has now become a symbol of unity across towns, borders, countries and continents and is often the central point of focus for any outdoor gathering or celebration. In 1897, beacons were lit to celebrate Queen Victoria’s Diamond Jubilee. In 1977, 2002 and 2012, beacons commemorated the Silver, Golden and Diamond Jubilees of The Queen, and in 2016 Her Majesty’s 90th birthday. Over 1,500 beacons will be lit throughout the United Kingdom, Channel Islands, Isle of Man and UK Overseas Territories.

There will be three kinds of beacon events:

Find out more at: www.queensjubileebeacons.com

A Service of Thanksgiving for The Queen’s reign will be held at St Paul’s Cathedral. Further details will be announced in due course.

Platinum Party at the Palace: The BBC will stage and broadcast a special live concert from Buckingham Palace that will bring together some of the world’s biggest entertainment stars to celebrate the most significant and joyous moments from The Queen’s seven decade reign. Find out more at: www.platinumjubilee.gov.uk

Tickets will were allocated via a ballot (which has now closed) but some remaining tickets are being made available to charitable organisations including those who work in support of young people, the military, the environment and those who supported communities during the pandemic.

The Big Jubilee Lunch: Every year since the idea began in 2009 The Big Lunch has encouraged communities to celebrate their connections and get to know each other a little bit better, coming together in a spirit of fun and friendship. In 2022 The Big Lunch will bring the Jubilee celebrations into the heart of every community.

People are invited to share friendship, food and fun with neighbours as part of the Platinum Jubilee celebrations. A Big Jubilee Lunch can be big or small - street party or picnic, tea and cake or a garden barbeque. The Big Lunch provides tips and ideas for hosting an event. Over 1400 people have registered to host Big Jubilee Lunches so far, with events being planned across the length and breadth of the country.

The Platinum Jubilee Pageant: Artistic performers, dancers, musicians, military personnel, key workers and volunteers will unite to tell the story of The Queen’s 70 year reign in an awe-inspiring festival of creativity. The London based Pageant will combine pomp and ceremony, street arts, theatre, music, circus, costumes as well as cutting-edge visual technology, drawing on talent from every part of the United Kingdom and across the Commonwealth.

Forming an important part of the Platinum Pageant, the ‘River of Hope’ section will comprise of two hundred silk flags which will process down The Mall, appearing like a moving river. Primary and secondary school children are invited to create a picture of their hopes and aspirations for the planet over the next 70 years. A selection of these creations will be transferred on to silk flags, which will carried by secondary school pupils in the Pageant.

The artwork for the flags will be focused on climate change and incorporate the children’s messages for the future. Teachers from applying schools will be provided with step-by-step guides to creating a beautiful digital artwork with their students, of which 200 will then be selected for the flags. The selected artwork will also be shown up and down the country on screens as part of the Jubilee celebrations. For more information and to register your school’s interest to take part please go to www.riverofhope.co.uk.