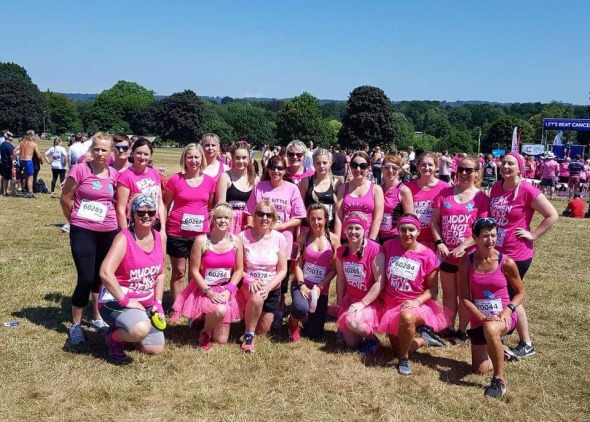 A team of Strider ladies took on the Pretty Muddy 5km run at Mote Park, Maidstone on Sunday, 8 July.

The fun event, run by Cancer Research, saw the ladies running 5km, taking on inflatable obstacles and getting down right muddy to raise money for the worthy cause.

Sandra Gardiner co-ordinated the 23-strong ladies team, she said: ‘This was a very special running event for women. It involved all sorts of ladies running for some very special reasons. We had a lot of fun and were cheered on by some great supporters.'

Mid-Kent 5 miler
Abbey amd Ross Campbell were in action at the Mid Kent 5 milers on Sunday 15 July. Searing conditions meant the runners had a lot to contend with. However it did not stop Abbey from producing a very respectable time of 48.22, knocking 6 minutes off her PB. Ross returned a time of 44.53.

The sold out event saw 750 runners taking on trails and off road tracks over 13.1 miles.

Sally Smith and her 1-year old daughter Sophie travelled to Goudhurst for the 3rd event in a series of 5 races for buggy runners.

Like others Sally struggled with the heat completing the 3.2 mile hilly course in 27.59mins. A good minute slower than her last effort. She took 3rd overall and 2nd lady.