A Busy Week For The Sittingbourne Striders 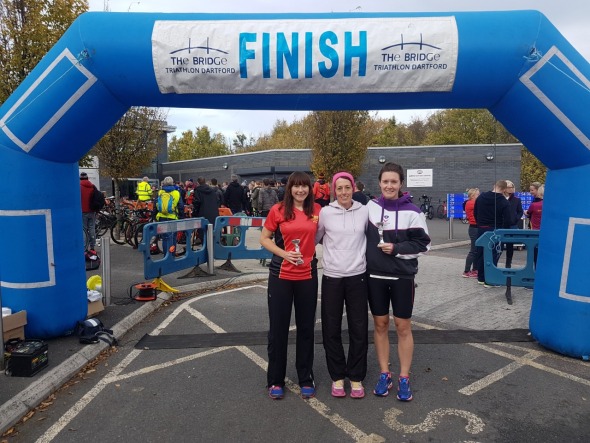 On Sunday 4 Novemer 21 Striders made up 7 teams for the South East Team Duathlon Championships held at Cyclopark in Gravesend.

The event, in which 31 teams were entered, involved a 3km run followed by a undulating technical 12.5km bike leg arpund the cyclopark and finished with another 3km run. I'm completion of the 18.5km the athletes tag their team mate to do the distance again until all 3 have finished.

First team back for the club and taking 2nd in the ladies competition were Liz Weeks, Ellie Hynes and Sally Smith. They had a combined time of 2hrs 40mins with Liz the fastest of the trio in 50mins 50secs.

Afterwards Sally said: 'I felt really privileged to race alongside Liz and Ellie. They are fantastic athletes and taking a podium spot was a real bonus.'

The next team back taking 9th in the mixed team event were Claire Wright, Shelley Coker and James Reeves. They completed the event in a combined time of 2hrs 48mins.

Ollie Pryer whizzed round the course in 3hrs 26mins 25secs. Sam Hewitt did a brilliant run to return a time of 4hrs 27mins 57secs.

Yvonne Crawford and Jackie Austin headed to Deal for the 5 mile race along the seafront.

Jackie was first back in 45mins 34secs with Yvonne just over the 50-min mark with a time of 51mins 8secs.