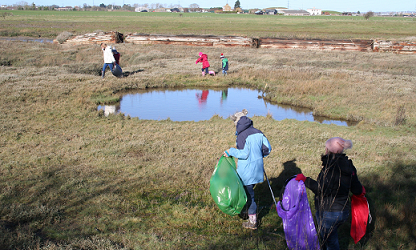 Said Amanda Thesiger, Swale FoE's Secretary, told SFM News: "What a great turnout from the brave and the bold of Faversham and further afield who came to clear the Saxon Shore Way and saltmarsh of some rather disgusting rubbish and litter! More than 80 people, young and old, came to help and we brought in around as many sacks, and large amounts of bulkier items, some of which has been lurking in the area for years. Hopefully, by clearing the rubbish we've helped the prospects of the Sea Aster Bee, the Redshank, the Kingfisher and the Frogbit, to name a few of the local species."

Just before 10am, a steady stream of volunteers of all ages arrived on Standard Quay. Once issued with pickers and bags, they fanned along the Creek from Standard Quay to Nagden. They returned with rich pickings, the most spectacular (and heaviest) of them a leather armchair! Members of local groups such as Faversham Footpaths Group, Plastic Free Faversham, Swale Lib Dems and Swale Green Party also went along to support the morning.