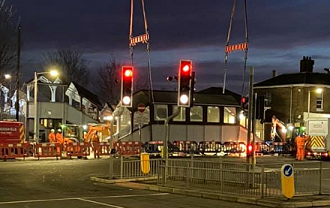 One of Kent's oldest rail bridges, at Sittingbourne railway station, has been demolished.

The Victorian foot bridge was one of the oldest in the county and was lifted out of the way and taken away for scrap.

A Network Rail spokesperson told SFM News: "it had come to the end of it's life and it was not safe to continue to use".