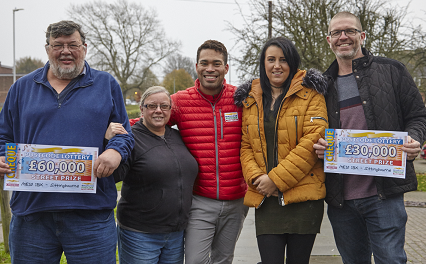 One of the Borden Lane neighbours scooped £30,000, while the second doubled their prize to £60,000 thanks to playing with two tickets. Wayne Mitchell, aged 46 and a self-employed electrician, was with his fiancé Michelle and their three-year-old son Edward when they received the cheque for £30,000. Wayne told SFM News: "I was quite astounded when I saw the amount I had won. We're in the process of renovating our house and this will mean we can get it finished much sooner than expected. I have a feeling Michelle will enjoy spending the win more than me. My daughter is at university so she'll definitely want a chunk of it too! I'm really looking forwarding to just relaxing and enjoying the win."

Martin Kite, aged 64, doubled his prize to a staggering £60,000 thanks to playing with two tickets. Martin and his wife Julie were jetting off to Iceland just after receiving their cheque and told SFM News: "We're going on holiday today so we'll be celebrating there. We'll need to get a decent bottle of champagne, this definitely calls for it! It will be an extra special Christmas too and I'll be able to get some great presents for my kids!"

People's Postcode Lottery ambassador Danyl Johnson presented the winners with their cheques and told us that he was "chuffed for Wayne and Martin! It sounds like they'll both enjoy spending their prize money and treating themselves."

With a minimum of 32% from every ticket going to charity, players of People's Postcode Lottery have now raised £361 million for over 4,000 good causes across Great Britain and internationally.

A number of local Sittingbourne charities have benefitted from the funding raised by players, including Space 2 Be Me, which received £6,400 last year to run employability workshops for young people with special needs.