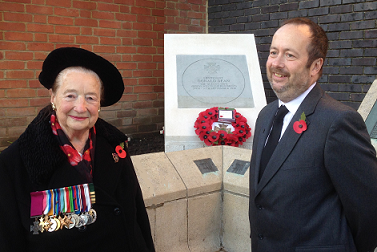 Following on from today's Remembrance Sunday Service, at the War Memorial on Central Avenue in Sittingbourne, a special service was held to mark a VC stone dedicated to local war hero Lt Donald Dean VC.

The service was broadcast on 106.9 SFM and included readings from Rev'd Jean Burrows and Pat Tatchell and a personal reflection from David Bavin, Donald Dean's grandson. The service was also attended by Mr Dean's daughter, Susan Bavin, along with other dignitaries including the Vice Lord Lieutenant of Kent, Richard Oldfield, the Mayor Of Swale, Cllr George Bobbin and Cllr Andrew Bowles, Leader of Swale Borough Council.

Donald Dean was awarded the Victoria Cross, aged just 21, in September 1918 for his bravery during one of the final battles of the harsh conflict. Although born in 1897 in Surrey Mr Dean had strong links with the Sittingbourne area and his relatives were part of the successful local brick-making business Smeed Dean. When war broke out he was living with his parents in Tunstall.

An inscribed paving stone (pictured above) in memory of him, was unveiled at 2.50pm as part of the service.