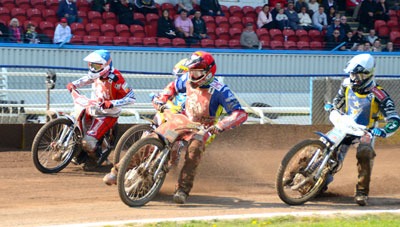 A bumper Bank Holiday crowd welcomed Speedway racing back for its second season to Central Park on Bank Holiday Monday (21st April) afternoon, as the Kent CTA Fire Kings plundered their first piece of silverware of the campaign claiming the Easter Trophy in a competitive clash with a spirited King's Lynn Young Stars' side down from Norfolk.

That the homesters were not going to get everything their way under sunny Swale skies was highlighted in the very first race as new Kent skipper Simon Lambert's bike shuddered to a halt on lap two courtesy of a faulty carburettor, meaning the Kings' number one was unable to assist fellow newcomer Luke Chessell's attempts to hold off the ultra-experienced pairing for the visitors of guest Ben Wilson and Darren Mallett serving up a maximum start for the Norfolk side.

The Kings though were imperious in the immediacy of their comeback, reeling off three 5-1s of their own in heats two through to four to establish an ultimately decisive lead. Young Londoner, Luke Harris racing at Central Park for the first time, was delighted to match the distinction achieved on the road last month when he won his first-ever competitive race by doing likewise on his first home trip out - the lively reserve pairing of the Northolt-based teenager Harris and a fourth King's debutant Brandon Freemantle setting the Kent side well on the way in heat 2. Ultimately six out of the seven CTA Fire Kings' riders were to record individual heat wins: the Eastbourne-based Freemantle celebrating his home debut with a decisive win over the rider he's replaced in the Kent line-up this term, Adam Kirby after the unlucky Chessell fell awkwardly in a rerun heat 8.

By that mid-way point the returning favourite son of the Central Park faithful, Ben Morley had underlined his hugely confident start to the season by reeling off two wins from his opening pair of rides and the only surprise was the Southend speedster had reluctantly to settle for two second places behind the visitors' top man Wilson, before partnering his captain Lambert to an impressive maximum in heat 15. The Easter Trophy was firmly in the Kings' possession way before that final ride though with Benji Compton and Lambert recording a pair of heat wins, as a winning nine points margin was established by the completion of heat 13. A local favourite in opposition colours made his mark (literally in his case) in the penultimate race, as former Iwade graduate Marc Owen recovered from a shaky start to the meeting by surprisingly out-gating the Kings' Compton.

There was certainly enough egg-citement on show to send the holiday crowd away happy. Next up for the Kent team are back to back away matches the weekend after next, visiting the Coventry Storm in a league encounter on Friday May 2nd before heading further north into the Potteries to do battle with Stoke on May 3rd. Next up at Central Park is another Bank Holiday afternoon meeting: with the always good value Mildenhall Fen Tigers from Suffolk visiting in a National Trophy match on the May Day holiday on the 5th. of next month.