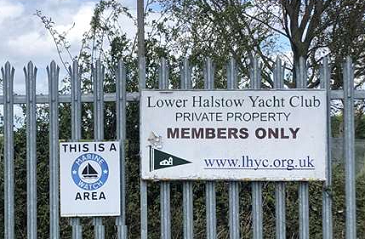 The Lower Halstow Yacht Club is remembering a "well-respected member and experienced sailor" who died in a tragic accident after he fell from his boat at the weekend.

In a released statement, following the tragedy in the early hours of Sunday (2nd May) morning, the club said: "We can confirm a club member who had been staying overnight on his boat, which was on its mooring just off the club’s jetty and slipway, fell from his boat on to the soft mud of Halstow Creek. We understand a local resident heard shouting and alerted the police at around 2am. At the time the tide would have been approaching the moored yacht. We understand the police recovered him from the water some time later using a dinghy from the club. Both Sheppey Coastguard and Sheerness lifeboat were tasked at around 3.30am, some one-and-a-half hours after the initial report to the police. The casualty was a well-respected member and experienced sailor and our thoughts go out to his wife and family."

Kent Police confirmed that officers were called just after 2.00am on Sunday (2nd May) morning and that "a man was recovered and taken to a local hospital where he was later pronounced dead. The man’s next of kin have been informed and a report will now be prepared for the coroner."

It's believed that SECAmb (The South East Coast Ambulance Service) and The KFRS (Kent Fire and Rescue Service) were also asked to attend the scene, to try and save the man.