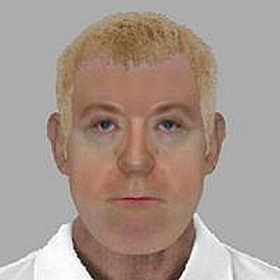 The resident, an elderly woman, answered a knock on the door to find a man holding a clipboard and claiming to be a police officer, who said he was there to speak to her about a previous incident at her home. It is understood the man flashed a card at her but did not give her chance to inspect it properly. On the grounds of having an update to the incident, the man persuaded the victim to follow him into her front room, where it is believed he closed the door, blocking her view of the entrance to the house.

Suspicious, the victim asked the man to leave and challenged his identity. The suspect said he would get his identity card from his car and left. The victim then saw him driving off towards the A2 in a blue saloon car. Later, she noticed someone had searched the upstairs of her house and stolen a substantial quantity of cash from her bedroom.

Detectives have now released an e-fit image of a man they believe could help with their enquiries (above). The suspect has been described as a white man with thinning fair hair and stubble. He is believed to be around 5ft 9ins tall and of medium build.

Senior investigating officer, DCI Ann Lisseman of Kent Police, told SFM News: 'We believe this victim may have been specifically targeted and we are working closely with her on our lines of enquiry.
This was a particularly unpleasant incident that has left a vulnerable lady very shaken up and upset. Never let anyone into your house that you don't know or aren't expecting. Genuine visitors will be more than happy to provide identification and remain outside while you verify it with their company and the police. A police officer will never come to your door and refuse to provide identification straight away, so please ask for it whenever you are unsure. No Kent Police officer will mind waiting outside while you verify who they are - look at their ID cards closely and if you are still unhappy, close the door and call us on 101 to confirm their identity. If you have any doubts at all, don't let them in. Ask them to come back another time or to arrange an appointment at a convenient time for you, when you can have a friend or neighbour present."

Anybody with any information on this incident is asked to call DC Richard Allingham on 01795 419230, quoting crime reference XY/020346/13. Alternatively they can contact Kent Crimestoppers free (from any landline) and anonimously on 0800 555 111.