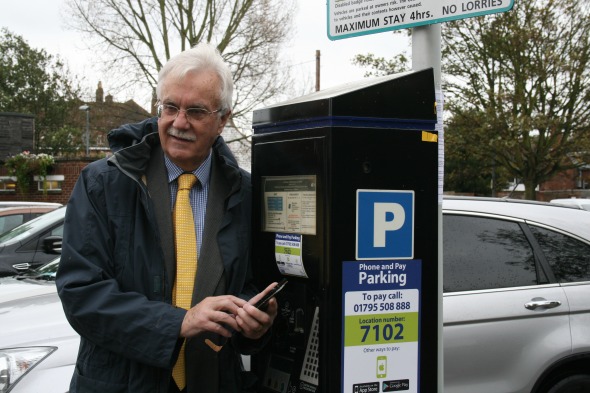 Looking for small change to park your car in Swale could be a thing of the past, thanks to the new Phone and Pay parking scheme launched by Swale Borough Council.

All 31 pay and display car parks owned by the council are encouraging drivers to use the new system with their mobile phones. And not only is it easier than searching for odd coins, once the app is downloaded it is actually quicker than putting cash in the machine and then returning to the car to display the ticket on the windscreen.  Drivers can even pay for their car parking before they leave home which could help motorists in a hurry to make meetings or catch a train for example.

Cllr Mike Cosgrove, from Swale Borough Council, officially launched the scheme in his home town of Faversham this week. He told SFM News: "I am not the most technically qualified person, but even I managed to download the app and could see how superb this system is. The real beauty of it is you pay for the time you need and you don't need to stick tickets on your windscreen as the information is imparted to the wardens on their hand held device within seconds. Although officially launched this week, we have had the system up and running for two weeks and so far over 1,000 motorists have used it successfully. And certainly the drivers I met in Faversham's Central Car Park had nothing but praise for it."

For further details about the scheme you can visit www.phoneandpay.co.uk.