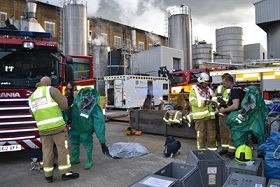 Kent Fire and Rescue Service (KFRS) took part in an exercise on Thursday (11th December) to test firefighters and the mill staff's response to a chemical incident at Kemsley Paper Mill - owned by DS Smith - the second biggest recycled fibre-based operation in Europe.

The staged exercise involved a reversing heavy goods vehicle hitting a member of staff, trapping him beneath the articulated trailer. The drama intensified after a chemical chlorine container dislodged during the collision, allowing the chemicals to leak.

Four fire engines from Sittingbourne, Sheppey, Faversham and Medway, along with KFRS's Incident Support Unit and around 20 firefighters were sent to the plant in Kemsley, Sittingbourne at 10.45am. The decontamination team wore chemical protection suits and used specialist chemical detection equipment to rehearse how they would make the scene safe by decontaminating the area and safely disposing of the spilt chemicals.

The exercise lasted for two hours and saw fire crews using air bags to release the casualty from beneath the trailer. Five other 'mock' casualties were lead or carried to safety suffering from nausea and breathing difficulties.

KFRS Station Manager, Stuart Beadle, who was responsible for the exercise told SFM News: "To make it as realistic as possible, crews and staff were unaware of what they would face, as the exact nature of the incident was only revealed on the day. This meant they had to react as they would to a real-life situation allowing us to test our operational plans and Kemsley Paper Mill to test their emergency and incident control procedures, which included a full site evacuation."

Mr Jonathan Hunt, Site Facilities Engineer at Kemsley Paper Mill, told SFM News: "We have an active firefighting and emergency response team on site and our priorities are to ensure the safety of our staff, contractors and the general public. Our team are well practised in their strategic management of incidents but it's a massive benefit for us to work closely with KFRS sharing knowledge and putting our well-rehearsed emergency procedures into place."

Stuart concluded by saying that the: "KFRS is called to a wide range of incidents - not just house fires and car crashes - and this exercise has given us the opportunity to prepare for a more unusual scenario. Working in partnership with the mill ensures we are able to set effective communication channels to resolve incidents quickly and smoothly should the worst ever happen. We're grateful to Kemsley Paper Mill for facilitating this training event."