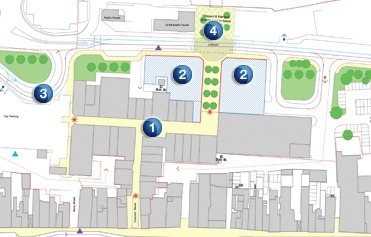 Tesco confirmed that it had taken the UK charge as a direct result of its decision to "move away from building big stores" and that the company will "now concentrate on [its] online and convenience shop businesses". This resulted in the company identifying more than 100 sites - the majority bought between the last 5 to 10 years - that it would no longer develop.

The decision has had a mixed reaction locally but Tesco's withdrawal from the proposed regeneration on land north of the railway line means that the following plans will no longer be going ahead:-

Tony Weaver will be discussing how this may or may not have an effect on Sittingbourne's Regeneration Plans on "In The Bourne" all this week - Mon-Fri 11am-3pm on 106.9 SFM.