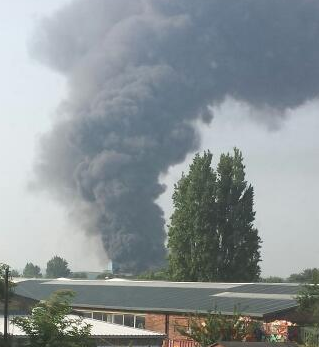 Kent Fire & Rescue Service (KFRS) have been tackling a huge blaze at the Sweeep Kuusakoski building on Gas Road in Milton Regis.

It is believed that the fire broke out just after 8.00am this morning and 10 fire engines were sent to the scene. Two men, in their 20's and workers at the plant, suffered smoke inhalation and were taken to hospital. Local residents in the Milton Regis area were advised to keep their windows and doors shut as a precaution and a large exclusion zone was set up around the scene with the B2005 Mill Way being closed.

An investigation in to the cause of the fire will be instigated by the KFRS later today.