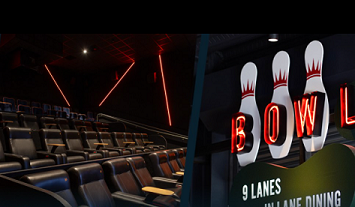 The Light Sittingbourne officially opened its doors today (Friday 28th May) after the Mayor of Swale, Cllr Paul Stephen, cut the ribbon at the formal opening event on Thursday evening.

The Mayor was joined by The Lady Mayoress, Cllr Sarah Stephen and Cllr Monique Bonney in declaring the leisure venue open following a presentation where The Light Co-founder Keith Pullinger and CEO James Morris thanked the local council for their support.

Cllr Monique Bonney, cabinet member for property and economy at Swale Borough Council, told SFM News: “I am delighted to have a really good quality scheme opening in the town. The last year hasn’t been easy for anyone, but I am confident people will think it was worth the wait and will enjoy it for years to come.”

The opening of The Light, as part of the Spirit of Sittingbourne development at Bourne Place, will be home to an eight-screen cinema, a nine-lane bowling alley, a retro arcade and diner with three resident vendors providing pizzas, burgers, hotdogs, sides and desserts.