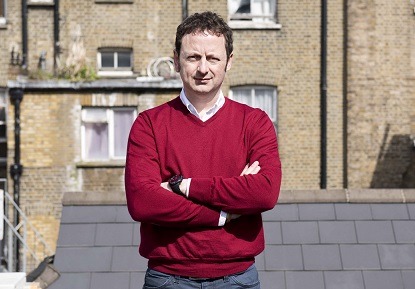 BBC One daytime programme 'The Housing Enforcers', featuring Matt Allwright, the champion of consumer rights, heads to Sittingbourne and Sheerness next week.

The programme sees Matt join a number of Council teams across the UK including Swale Borough Council as a trainee housing officer, separating hovels from homes in a number locations across the Borough. In this new series due to be screened all of next week (Mon 4th May - Fri 8th May), Matt confronts all kinds of people associated with housing issues. From landlords to tenants, and even nightmare neighbours, Matt comes to the rescue of anyone in need.

Sue Davis, one of Swale Borough Council's Housing Options Officers who accompanied Matt for several housing visits said she really enjoyed the whole process. Sue told SFM News "When it was first mooted, I was naturally quite nervous about the occasion....after all I don't normally have a camera crew following me around as part of my day job! However, as the programme gathered momentum, it became a really enjoyable experience. Matt himself was extremely professional and was a pleasure to work with. Clearly there is an important purpose to this type of TV programme showing the important work we in Swale do on a day to day basis. Our team work extremely hard to do everything in our power to prevent homelessness and provide sound advice to our residents".

Hannah Holdstock, one of Swale's Housing Support Officers is also featured in the programme and she told SFM News: "I was involved in one or two of the episodes and like Sue, I very much enjoyed working with Matt and his production crew and also thought by drawing attention to these issues, it was a really good idea for us to be involved".

Tune into the series from Monday 4th May at 9.00am on BBC One. Tuesday - Thursday's programmes will start at 9.15am and on Friday it will switch to BBC Two.