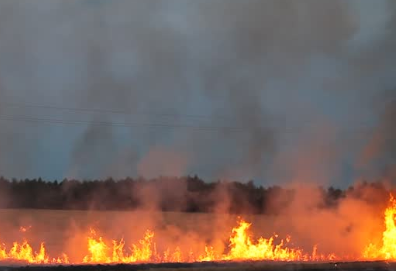 Kent Fire and Rescue Service (KFRS) were called to reports of a fire in corn fields off Highsted Road, in Rodmersham, earlier today (Saturday 14th August).

Two fire engines were sent to the scene at around 3:30pm and crews used hose reel jets to extinguish the flames, which destroyed an area of approximately 10m x 10m of corn.

The KFRS told SFM News: "Grass fires are more common in the summer months, when the ground is dry and can cause flames to spread more quickly. Incidents like this can have a devastating impact, injuring or killing wildlife, destroying property and livelihoods, and even putting people’s lives at risk.

You can help to reduce the risk of a grass fire, by:

- When lighting a bonfire, keep it to a manageable size, make sure it’s well clear of greenery and property, and always supervise it while it’s burning. Avoid having a bonfire in windy weather.

- Dispose of smoking materials responsibly, making sure they’re fully stubbed out and cooled before being put in a bin - consider using a portable ashtray when on the go.

- Place disposable barbecues on a sturdy, non-flammable surface when cooking, away from greenery and property, and only place in a bin once fully cool".