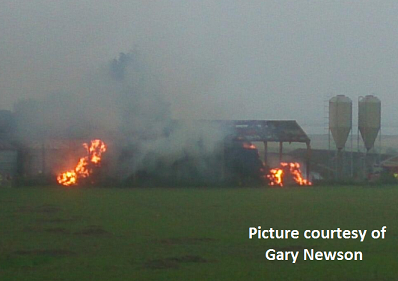 Kent Fire & Rescue (KFRS) firefighters, from Sittingbourne fire station, were called earlier today to tackle a fire in a dutch barn in Tonge.

The KFRS we called shortly afrer 18:15hrs to the dutch barn, situated in Blacketts Road in Tonge, containing approximately 120 tonnes of bayled straw.

Crews were deployed to protect the surrounding area and the barn was allowed to burn under controlled conditions.

Local residents were advised to keep windows and doors closed as a precaution.