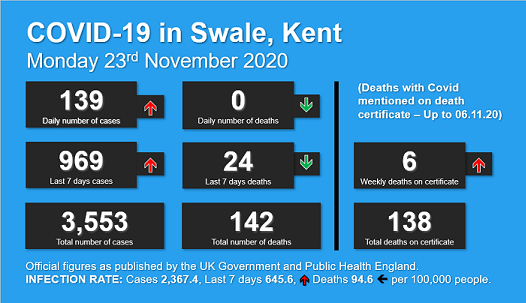 An emergency meeting to place this afternoon (Monday 23rd November) to help tackle the number of cases of coronavirus in Swale.

The meeting was called by Swale Borough Council in response to the recent rise in the number of cases in the borough with the latest government figures showing 645.6 cases per 100,000 people in the week up to Wednesday 18th November - just behind Hull, which was the country's worst-affected place last week.

Cllr Roger Truelove, Leader of Swale Borough Council, told SFM News: “This was a valuable meeting where we were able to bring together a wide range of interested parties to discuss where we are and how we are going to improve the situation. We received the very latest figures from our public health colleagues, and these showed that whilst we do seem to be starting to see a fall in cases locally, they are clearly still too high. There are also worrying signs that the infection is growing among the over-60’s who are more vulnerable to this virus, and we are sadly starting to see the number of deaths increase. We also heard that Swale has the second highest level of testing in the county, which shows that the work we’ve been doing to encourage people with symptoms to get tested is getting through, and it will ultimately make a difference.

Cllr Truelove went on to add: “We also had confirmation that only 12 per cent of cases in the last couple of weeks are related to care homes and prison settings, and that this isn’t a problem that is just on the Isle of Sheppey, but elsewhere across the borough. The overwhelming majority of cases are through community transmission. It’s spreading in residential settings, and through social activity and it only takes a small number of people to create the clusters of cases that are driving up our figures. This is why we needed to call the meeting, so we could be sure where we need to concentrate our resources to get the cases under control again. We will be getting in touch with local supermarkets to ask for them to be as vigilant as possible, and we will be carrying out work to make sure everyone involved understands the reasons why people might not feel able to follow the rules.

He continued by saying:  “Parents seen with in supermarkets with children who should be isolating may not have any other childcare and can’t afford the minimum spend for a home delivery. People may be unwilling to get a test as they can’t afford to have time off work. These are issues we need to be able to identify so the relevant agencies can step in with the right support. Everyone is committed to making sure people understand the seriousness of the situation to people, and if we don’t follow the rules in place, we face a winter of further restrictions.”

The meeting was attended by officers from Kent County Council, Public Health England, Kent Police, HM Prison Service, the NHS, The Federation of Small Businesses, The Department for Work and Pensions, Optivo and Swale CVS and at the meeting it was revealed that only 12% of the borough's total cases come from it's two maximum security prions and local care homes.