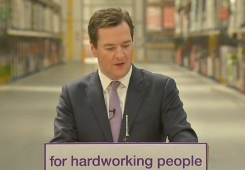 During the visit, followed by all major UK news organisations, he defended the benefits and tax changes that came in to effect yesterday, accusing critics of peddling "headline-seeking nonsense". The chancellor claimed that nine out of ten working households would actually be better off. Yesterday's shake-up included cuts to housing benefit, for some social housing tenants with a spare room, and alterations to council tax.

Mr Osborne argued that the government had had to "take difficult decisions to cut the deficit" as the current benefits system was "fundamentally broken".

Changes, introduced from the 1st April include:

The Chancellor told workers "for too long, we've had a system where people who did the right thing - who get up in the morning and work hard - felt penalised for it, while people who did the wrong thing got rewarded for it. That's wrong. So this month we [The Coalition Government] are going to put things right. This month we will make work pay."

Listeners to 106.9 SFM will be able to discuss the Chancellor's visit, and his comments, with local MP Gordon Henderson on his LIVE On Air Surgery on Friday 12th April, on Tony Weaver's "In The Bourne" Programme between 1 and 2pm.