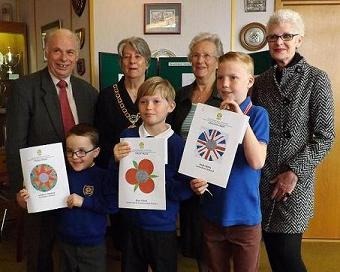 After much deliberation, Sittingbourne in Bloom have finally decided whose design will be planted on the station roundabout in late May.

Each year, Sittingbourne in Bloom invites the students from all the primary schools in the town to design a layout for the summer bedding on the station roundabout, which is sponsored by ‘Lets Go Green Cabs'.

This year, seven schools entered the competition with 400 entries being received. The entries were whittled down to a short list of 25, with the winning design coming from Ben Clark of Grove Park School. Second place went to Jack Mills of Lansdown School, with third place going to Andrew Dutton of St Peter's Catholic School.

Mayor of Swale, Cllr Sue Gent, hosted the prize giving event in her parlour at 2pm on Monday 10 March and said: "This competition was very popular and triggered some very clever ideas from those who took the time to enter. Only one winner could be selected and I, along with the rest of Swale cannot wait to see Ben Clark's design in bloom."