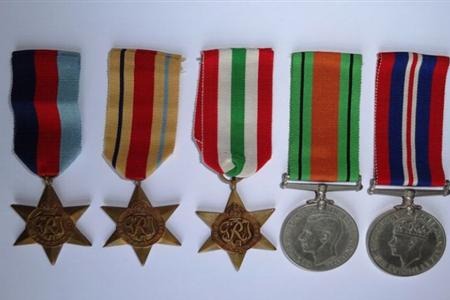 At around 6.40pm on Tuesday (18th March) evening medals were stolen from the home of a 100-year-old war hero. The victim left his address in Cherry Close, Sittingbourne, to attend a British Legion function. When he returned, he found the house had been ransacked and a number of his war medals - belonging to both him for his time in the service and his father, including one from HMS Swift - and a quantity of cash, believed to be around £300 and £400, taken.

The following day, it was reported another property on the same street was burgled between 7.25pm and 11.25pm. When the 75-year-old victim returned to the property, she found her belongings strewn everywhere. A diamond ring worth £400, a camera, a Nintendo Wii and a clock were among items stolen.

DCI Ann Lisseman, commander of the North Divisional Burglary Teams, told SFM News "The people who committed these despicable crime are cowardly and clearly lack any respect for their community. At present, we are linking these incidents. In particular, stealing medals from a war hero is disgraceful. My officers are doing all they can and using all the tools at their disposal to track down the offenders and bring them to justice. We have already executed a number of warrants and intend to continue to do so, as well as pursuing other lines of enquiry. I know the community will feel as strongly as we do that the person or people who committed these offences need to be caught and brought to justice. We ask that members of the public come forward with any information."

Anybody with any information is asked to contact burglary detectives directly on 01474 366666 or alternatively they can remain anonymous by calling Kent Crimestoppers on 0800 555 111 (free from any landline).