The Album Show with Jerry Wright 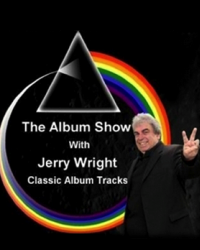 The legend that is Jerry Wright was born in Maidstone and has been involved with radio offshore and onshore for many years.

From humble beginnings at Hospital Radio Maidstone and working as an unpaid station assistant and tape re-claimer at BBC Radio Medway / Kent in Chatham.

He worked for many years as Ships DJ  on The Olau Finn and Olau Brittania MK1 entertaining passengers for local shipping company Olau Line UK. based at Sheerness in the early 80's .

After that his presenting career began with Radio Caroline in January 1986, broadcasting from a converted trawler anchored in the North Sea. Then later with Mellow 1557, Invicta Supergold / Invicta FM, KFM, TLR, Medway FM, CTfm, CTR and KMfm in Canterbury and Thanet.

Jerry's love for proper music can now be heard on The Album Show on 106.9 SFM on Monday nights from 7pm - 9pm.